Bring on the Fluids!

I rescheduled my 12 week appointment for week 10, the end of September.  I'd lost 3 lbs in the 2 weeks since I'd been there.  My blood pressure, due to the NCS/POTS has always been very low, but it was really low at this visit.

On a plus side, I heard the baby's heartbeat.  Only one - everyone that we'd told at this point assumed that I must be carrying twins, and that was causing my sickness.

Doctor gave me a perspiration for Phenergan, but said it was not something to take unless I was home and not needing to go anywhere for a while.  My doctor told me to not worry about eating, my appetite would come in due time.  But I needed to get fluids in me; at least 60 oz.   I was told, if things didn't improve by the end of the week, I'd be put on IV fluids.  That scared me.

So I went home, took the Phenergan.  No joke, I was asleep on the couch in 20 minutes, and slept for 4 hours.  I woke up to get sick.

So the end of the week came, and things didn't improve.  In fact, they were getting worse.  I couldn't keep down any fluids, and the though of eating anything made me sick, so I didn't even bother.


I guess if you've never experienced morning sickness that's lasted more than a week or 2, you might not get it.  And if you're a guy, you have NO IDEA at all what it feels like.

Let me break it down for you.  Have you ever had a stomach flu? or food poisoning?  It took a lot out of you, right?  You felt like you spent all day in the bathroom, right?  And the last thing you wanted was to eat or drink something, in fear of it coming back up.  But the relief you felt knowing that it's only going to last a few days...  Yea, imagine all that, except you don't know when it's going to stop.  That's HG.


I made the call on Friday, and at 1:30 I found myself in the Intervention Radiology department, having a PICC Line put in.  They numbed my arm well enough, but the procedure itself was fairly long, and awkward.  The Nurse was being observed, as he was being introduced to a brand new "kit" that had it's own procedures.  They were carrying on a conversation while he put 45cm catheter in my arm and chest.

My arm was so sore, I wanted to put a heating pad on it, but that was a no-no.  And taking a normal shower?  Not going to happen with that thing on my arm.  I'd have to wrap my arm with plastic wrap every time I wanted to take a shower.

The next morning I received my delivery of 7 days of 4000ml of Fluids, and met my nurse Bridget.  She was great, and it was nice to know that she'd seen many patients with similar symptoms, and were fine after a few weeks.  She was upset because the nutrients that were ordered for me were not delivered... in fact, there was a nation-wide back order.  I supposed that since I was getting the fluids, that was the most important part. 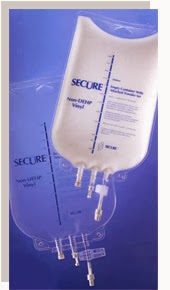 But I felt so guilty:  I couldn't take my prenatal vitamins, I couldn't eat.  Was my baby really ok?
Posted by Unknown at 8:00 AM